Posted on September 7, 2011 by gablebrannigan

Bangladesh is such a fascinating and fun country to visit. There is so much to see and do!

Bangladesh is located in Southern Asia, bordering the Bay of Bengal and between Burma and India. Bangladesh’s absolute location is 24 00 N, 90 00 E. (https://www.cia.gov/library/publications/the-world-factbook/geos/bg.html)

Map of Bangladesh and it's surrounding countries

People and their environment

Some of the natural resources the Bangladeshi people use are natural gases, fertile soil, water, coal, and timber. Most of Bangladesh is within the broad delta formed by the Ganges and Brahmaputra rivers. Bangladesh is mainly all flat land except for one significant area of hilly terrain, that is one-tenth of it’s territory.

Some of the major cities in Bangladesh include Dhaka, the capital, Chittagong, Khulna, and Rajshahi.

All about the People

Things to do in Bangladesh

Some places to go see in Bangladesh include, the Mainimati Ruins, the beach, the National Assembly building, the Bangladesh Tea Research Institute, and Shankharia Bazar. 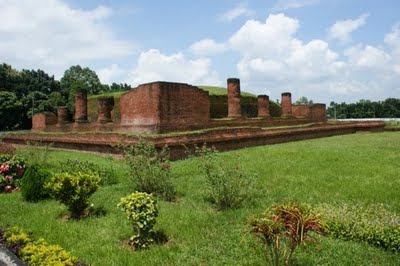 Bangladeshi cuisine incorporates many Persian-Arabic elements and the usage of beef greatly sets it apart from the cuisine in West Bengal in India. It also has considerable regional variations.

Posted on September 7, 2011 by gablebrannigan

Poland is a very unique and great country to visit!

People and their environment

Poland has many natural resources that the people use such as coal, sulfur, copper, natural gas, silver, lead, salt, amber, and arable land.

Poland is mostly flat plain, but there are mountains along the southern border.

Some of the major cities in Poland include Warsaw, the capital, and Krakow.

All about the People

Things to in Poland

Some places you must visit are, the Wawel castle, Old Town, Auschwitz, Lazienki Park and Chopin’s Monument, and the Wieliczka Salt Mine.

The Roman Catholic rituals of feasting and fasting, introduced to Poland around A.D. 900, have had a strong influence on Polish food traditions. During the fasts no meat is eaten, so many meatless and fish dishes have become a part of Polish cookery.

Located between two powerful neighbors, Germany and Russia, Poland was forced to form many political alliances throughout its history. These influenced its food customs. For example, the marriage of King Zygmunt to the Italian princess Bona Sforza in the sixteenth century brought Italian food customs to Poland.

Some Traditional Polish dishes include Pierogi, dough filled with cheese, potatoes, onions, cabbage, mushrooms, meat (or almost any other ingredient, savory or sweet, that you can think of),pierogi are served steaming hot boiled or fried and are accompanied by sour cream, also Zrazy, a filling of bacon, breadcrumbs, mushrooms, and cucumber is rolled inside a seasoned slice of sirloin beef then fried or grilled to allow the flavors to mingle.

Posted on September 2, 2011 by gablebrannigan

Welcome to WordPress.com. After you read this, you should delete and write your own post, with a new title above. Or hit Add New on the left (of the admin dashboard) to start a fresh post.